Red Thread is a fungus that can attack healthy lawns during the spring and fall when they are most susceptible to the disease due to temperatures ranging from 68 to 75 and when the humidity is high. Red thread forms patterns of discoloration in the lawn that can span from several inches to several feet in diameter. Affected ares show signs of pink or red threads at the tips of the grass blades as this illness progresses to the final stage. In order to prevent your lawn from contracting Red Thread, you need to maintain proper soil moisture, watering early in the morning. Avoid watering your lawn during times that will extend dew periods, in the late afternoon and early morning. 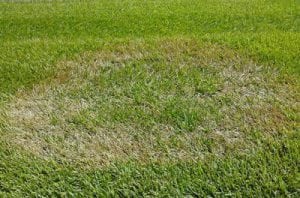 Brown Patch on a Lawn

Brown patch is a major summer disease of lawns. The most susceptible grass species include perennial ryegrass, tall fescue, and the bentgrass. On high-cut turf, patches may be from a few inches up to several feet in diameter and circular. In the early morning on dew-covered turf, white mycelium of the casual fungus can often be seen on and between grass leaves and stems of the patch. Sometimes all the grass within the patch is killed, creating a sunken or “pocket” effect. More often, the turn in these patches is thinned rather than completely killed.

On tall fescue, symptoms of brown patch can be observed in individual leaves and not necessarily in patches. Symptoms or leaves appear as irregular tan or light brown lesions surrounded by dark brown borders.

Grassy weeds can invade your lawn during the summer months. Three of the most common in this area are Nutsedge, Crabgrass, and Japanese Stilt Grass. All three of these pesky plants love hot summers and the many thunderstorms we get in this area.

Nutsedge is a light colored grass that grows faster than turf grass. It’s especially a problem in thin areas, wet soil conditions, and lawns that are cut too short. 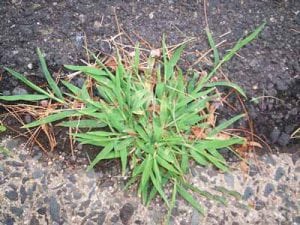 Crabgrass Along a Driveway

Crabgrass germinates in late spring and will thrive in thin and bare areas, lawns that are cut too short, and lawns under stress from heat, humidity, and the excessive summer thunderstorms we can have. The most common area is along walks and driveways and along shrub bed borders. These areas are commonly scalped down to the soil with string trimmers during mowing operations.

Japanese Stilt Grass is an invasive species that is similar to crabgrass. It is most often found on properties near wooded areas where it flourishes. It is very hard to control, and can take years of special attention to fall to aeration and seeding, fertilization, and heavy applications of pre-emergent crabgrass control in the spring.

I’ve been a customer of East Coast Lawn since FOREVER. They are awesome!

East Coast Lawns have been servicing our lawn for over 10 years. They have always done a great job and let me know what needs to be done to improve my lawn. They care about my lawn just as much as I do. I have recommended their service to many people who are as happy with their services as I am.

We have been satisfied customers of East Coast Lawn for six years. When we started, our lawn was 85% weeds, and after 2 years our lawn was full , lush, and mostly weed free. After three years, and ever since, we have had the best lawn on our block! Andy or who ever else performs the service, arrives in the cool of the morning, applies the product evenly, and always leaves a note and further instructions on line regarding the current condition of our lawn, what is being done to improve it, and anything we need to do to enhance the application (such as watering). When I have ever called or emailed with questions or comments, I got a response quickly. I would recommend them to anyone.

Showed up right on time. Ralph is enthusiastic about his work and helpful. Nice to see.

The service I have received is great and the people are very professional. I highly recommend them if you need work done and great prices call East Coast Lawn.

My lawn has never looked better! Carlos is absolutely pleasant and reliable in calling ahead so we can leave the gate open for him to get in the back yard. Very reasonably priced programs!

East Coast Lawn provides excellent professional services at a fair price. It would be difficult to duplicate on your own the quality of work they perform and how beautiful your lawn looks year after year. Everyone who I have worked with at East Coast is always available and ready to answer any questions you may have about your lawn.